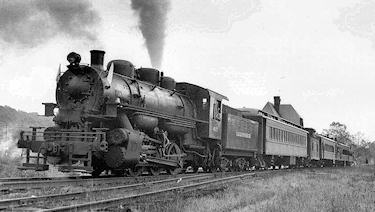 The Ligonier Valley Rail Road's main line between Ligonier and Latrobe was short, only 10.3 miles. Although short in length, it was long in construction. The Pennsylvania Railroad opened its route through Latrobe in 1852, and it wasn't long before a railroad line that would connect Ligonier with Latrobe was conceived. In April 1853, the Assembly passed the Act of Incorporation for the Latrobe and Ligonier Rail Road Company. The first surveys for the proposed line were done in 1853 and 1854. Unfortunately, the lofty goals of the incorporators exceeded their financial ability and so the plans languished. During the subsequent years there were several reorganizations and supplemental acts of the legislature. In May 1871, the name of the railroad was changed to the Ligonier Valley Rail Road Company. Following this change, there was a spurt of activity. The proposed line was again surveyed and by April 1872 the location was established. Grading and bridge work began and was mostly completed by the end of 1873. Again, lack of adequate finances made it impossible to complete the work. A serious effort was made to entice the PRR to take over the line and operate it, but the PRR declined the opportunity. Finally, Judge Thomas Mellon was approached, and a contract was signed in August 1877 whereby he would complete and operate the railroad line.

Judge Mellon was not particularly optimistic about the financial prospects of the railroad. However, he did think that it presented a good opportunity for his sons, Andrew and Richard, to gain business experience. Even though the line had been planned and graded as a standard gauge railroad (4' 8 ½"), Judge Mellon opted to construct and operate a narrow gauge (3') line. Narrow gauge lines were less expensive to construct and operate; at least in theory. A second-hand engine, small even by narrow gauge standards, and several other pieces of used equipment were obtained and the Liggie went into service on December 1, 1877. Thus, it took a quarter century to get the railroad built and into service.

Narrow gauge operation was not without its drawbacks. Perhaps the most serious was the impossibility of direct interchange of equipment with the PRR. Any load destined to points on the PRR or beyond needed to be transferred from a narrow gauge car to one of standard gauge. However, necessity was the mother of invention, and to help alleviate this difficulty, Robert H. Ramsey invented a device that permitted the trucks of a car to be changed from one gauge to the other. The Ligonier Valley was the first railroad to place the Ramsey Car Transfer into operation, which it did in 1878. Although its exact location is unknown, it was situated within the "Y" at Latrobe. A standard gauge car from the PRR would have its trucks changed to narrow gauge trucks at the Ramsey Car Transfer. That car could then continue its journey on the LVRR. Upon return to Latrobe, the process was reversed. Although an improvement over the transfer of a car's contents, it was still an expensive and inconvenient process. As business grew on the Ligonier Valley, the deficiencies of narrow gauge operation became intolerable and the line was converted to standard gauge in 1882, just five years after operation had begun.

The Ligonier Valley's mainline was a single-track railroad with team tracks, industrial sidings and spurs where needed. There were several long sidings west of Millbank in the flat area near the present entrance to Idlewild. These were used to stage the excursion passenger trains to and from Idlewild. A little west of the existing cement quarry tipple on westbound Rt. 30, Baker's Siding crossed the Loyalhanna on a deck girder bridge and served the quarry on the south side of the creek. Just west of Oakville Station, the single track mainline became double track and at St. Clair St. a third track appeared. Just east of the Main St. crossing, a fourth track appeared. This was also the location of the scales. The "Y" at Latrobe served as the point of interchange and connection with the PRR. There were four tracks on the east leg of the "Y" and two on the west leg.

The mainline had passenger stations, or shelters, at Ligonier, Bells, Millbank, Idlewild, Darlington, Long Bridge, Kingston, Osborne, Oakville and Latrobe. The LVRR used the PRR Latrobe station after the PRR tracks were elevated in the early 1900s.

The Liggie provided passenger service during its entire existence. The passenger trains also carried express and U.S. mail in closed pouches for Ligonier and adjacent communities. In the early years, steam engine powered passenger trains chugged back and forth between the terminal points. The Doodlebug protected the passenger schedule during the final two decades of the LVRR. Although the schedule would vary throughout the years, there were three to five weekday round trip runs between Ligonier and Latrobe. There was also Sunday service. In the twenties, the Ligonier Express, a train using PRR equipment ran directly between Pittsburgh and Ligonier during the summer season.

The Mellons, in order to increase their passenger business, established Idle Park, or Idlewild, soon after the railroad began operating. As many 8 to 10 additional round trips between Ligonier and Latrobe were added to the schedule for July 4th or Ligonier Valley community picnics at Idlewild. On these days, the freight service would be shut down. There were also numerous excursion trains from the PRR that made their way to Idlewild during the summer season. The Pennsy trains would use PRR crews with a Ligonier Valley pilot. The trains would lay over on sidings near present day Story Book Forest while the locomotives continued to Ligonier to be serviced and turned.

It was freight, however, that paid the bills. Although the Ligonier Valley hauled freight of all kinds, mineral products, stone, coal and coke, were the main source of freight revenue. It is likely that coal was one of the first products hauled by the railroad. Most of the coal and coke hauled over the mainline after the turn of the century originated on the Mill Creek Branch, but mines on the mainline produced traffic from the beginning. The Coal Pit Branch, about ½ mile in length, dated from the earliest days of the Ligonier Valley and presumably served a mine. Also, Loyalhanna No. 2, a shaft mine, was located directly opposite the present site of Lincoln Road Shopping Center. It developed along with the LVRR as S. H. Baker, president of the railroad, was also one of the principals of the coal company. There were several mines in the Long Bridge/Darlington area and also in the Oakville/Osborne area. The Elizabeth plant just south of Osborne consisted of a mine and 100 coke ovens. These were the only coke ovens on the mainline.

The Liggie carried stone products throughout its existence. There was a quarry in the Darlington area before the railroad was built. Booth and Flinn began operations on the south side of the Loyalhanna gorge in 1882. In 1884, the Ligonier Stone Block Company opened a quarry on the north side of the gorge. The last tipple from this operation still stands. Although the rock traffic dried up during the Depression, stone from this quarry, destined for the Conemaugh Dam flood control project, constituted the final significant freight business for the Ligonier Valley.

Timber was also a major source of freight traffic, particularly during the years that the Byers-Allen mill and the PW&S were in operation. Lumber also came from the Ligonier Lumber Company mill at Oak Grove. By 1930, this business had dwindled to nothing.

In the Latrobe area, the Ligonier Valley took on the role of an industrial switching operation serving the Railway Steel Springs plant, Latrobe Steel, Vulcan Mold, Stupakoff, Latrobe Foundry and Machine and others.

With the decline of the timber and the coal & coke industries, the major sources of freight traffic were gone forever. The remaining freight and passenger business was insufficient to justify the continuation of the entire railroad line. In addition, the state was going to condemn the line through the Loyalhanna gorge for expansion of the Lincoln Highway. Although the Ligonier Valley line between Latrobe and Ligonier served the public well for seventy-five years, the combination of negative circumstances was too much to overcome and the end of Liggie operations came on August 31, 1952.

The Pennsylvania Railroad took over that part of the Ligonier Valley mainline between Latrobe and Kingston. This permitted continued service to the industrial complex that had developed along the Liggie's right of way. Service continued into the Conrail era, but even that has now come to an end. Norfolk Southern's freight station and team tracks are situated within the former Ligonier Valley "Y," and the west leg is still used to for occasional storage of MOW (Maintenance of Way) equipment. And so, almost one hundred and forty years after Judge Mellon built his little railroad, a small part of it still remains in service.