The accident that occurred on Friday, July 5, 1912, was described in the Ligonier Echo (a local newspaper) as "A frightful and most terrible wreck, the worst ever known in the history of Westmoreland county railroading, occurred last Friday afternoon, July 5, 1912, at about 3:30 on the Wilpen branch of the Ligonier Valley Railroad. The results were appalling and the scenes at the wreck beyond description. Men, women and children are numbered as the victims in the list of dead and injured in the frightful collision that took place at the only curve on the branch between Ligonier and Wilpen at the edge of the race track on the Morningside farm about one and one-half miles north of Ligonier.

On the day of the wreck the passenger car was unusually crowded with people returning from holidays or fourth of July picnics, in addition to workers returning to their jobs in Wilpen or Fort Palmer and children going to Wilpen on picnics and to pick wildflowers. During the course of an average day passenger traffic was light and although freight trains ran all day, the passenger coach was operated twice a day. The first trip started from Ligonier at 6:40 in the morning, and the other from the same place at 3:20 in the afternoon. Employees of the LVRR working the branch were aware of the passenger schedule. The normal procedure on the branch was to back the trains up the track to their destination as there was no facility to turn the engines or trains around. Ligonier and Latrobe both had a "Wye", which is a section of 3 tracks that could be used to reverse the direction of an engine. 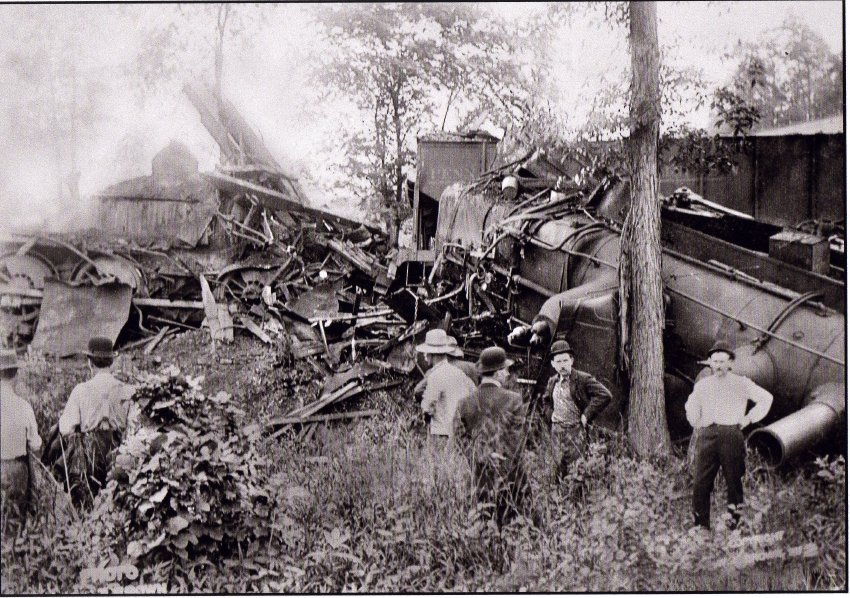 track. The train was finally made ready around 3:10 pm and Conductor Harry H. Knox (photo at left) went into the office of the Shenango Coal and Coke Company (the LVRR at the time did not have its own telephone line on the branch) at Wilpen and called Ligonier requesting permission to come ahead of the passenger train because they were late, short of water and anxious to finish their run. He also asked them to hold the passenger train at Ligonier until the arrival of the freight. The distance from Wilpen to Ligonier is about four miles and the freight train was so large that none of the sidings on the line would hold it until the passenger train could pass. For that reason Conductor Knox wanted the passenger train held until he could get to Ligonier. John Smith and James Mull were in the office of the Shenango Valley Company and heard Conductor Knox make the request and on his receiving the necessary order, Knox ran to his train and gave the signal to start. Although the details of what happened in Ligonier were never firmly established because the LVRR did not use written orders at the time, the message was received in Ligonier.

Promptly at the scheduled time of departure in Ligonier at 3:20 pm, Conductor Charles Kuhn cried "all aboard," and the Wilpen branch train, made up of a combination baggage and passenger car, with an engine pushing it, started on the journey. The train stopped at North Ligonier to pick up a passenger then continued toward Wilpen.

The two trains collided at about 3:40 pm at the only blind curve on that entire branch line. If either train had been a minute earlier or later they would have seen each other and probably had enough time to avoid or mitigate the disaster. As it happened the engineer on the passenger engine had time to throw the train in reverse but there wasn't enough time to actually get the train moving in the opposite direction. The two engines of the coal train plowed through the wooden coach, crushing it like an eggshell. John Fulgensie who was in the passenger car suffered bruises from a bad cut above the right eye. He said he had been terribly frightened when the wreck occurred, some of those with whom he had been riding having been thrown one way, and some another, some straight up in the air and others straight to the tracks, below. The sight had been too much for him, he said, and he had run away.

At time of wreck the approximate speed of the train was 25 miles per hour. Geo. Byers, the fireman, he says, gave the first sign that they were striking the passenger train. Byers yelled "My God, there's the coach!" Conductor Knox said that he had never run a freight on passenger time before and that he had worked on the Wilpen branch for over 3 years.